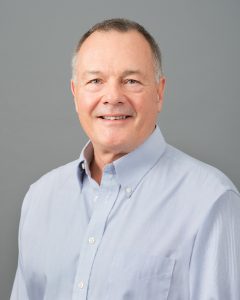 Merrimack County Savings Bank (the Merrimack) announces the retirement of Tom Dustin effective April 1, 2022. Dustin has served as Vice President, Commercial Loan Officer with the Merrimack for nearly 25 years, working in both residential and commercial lending.

“Tom’s solid reputation and admired character within the community has helped him develop and maintain several strong relationships between the Bank and our customers throughout greater Concord and over many years,” said James Gallagher, SVP, Senior Commercial Lending Officer.

Since joining the Merrimack in 1997, Dustin has worked in the Bank’s residential and business lending areas. He found his home in the Merrimack’s Commercial Lending department in 2007. Most recently Dustin demonstrated great strength and remarkable leadership during the pandemic, offering much needed reassurance, care and guidance to customers.

“We’re deeply grateful for Tom’s many years of service,” added Linda Lorden, President of the Merrimack. “Tom has been a big part of our growth, and he’s built enduring relationships with many of our business customers. His support has greatly contributed to our thriving local business community. We will miss Tom and wish him the best in his retirement!”

Through the years, Dustin has served on the Board of Trustees for The Friends Program, a non-profit social service agency providing shelter to homeless families, mentors to youth, mobilizing volunteer efforts to aid seniors and adults with disabilities. He has also been an integral part of the community as a life-long resident of Concord where he raised his two children and resides with his wife, Tamme.