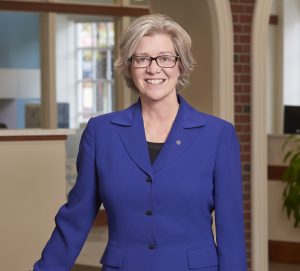 Linda Lorden, President of Merrimack County Savings Bank, elected Secretary of the Board for NH Bankers.

The New Hampshire Bankers Association (NH Bankers) elected Officers and Directors for the coming fiscal year during its Annual Meeting held virtually on June 19, 2020. The meeting was well attended, with over 150 members of the New Hampshire Banking industry.

Re-elected to the NH Bankers Board for 2-year terms were Lorden, Reginald Greene, Jr., President and CEO and Claremont Savings Bank. Richard Wallis was re-elected to a special 1-year term to complete his service as an officer of the Corporation. NH Bankers also welcomes Gary Barr, Market President-NH, TD Bank, who will complete the unexpired term of Steven Webb as a new member to its Board.

With an abbreviated virtual agenda, attendees heard from several esteemed speakers at the event. Emelia Galdieri, Deputy Bank Commissioner, provided an update from the State Banking Department, Jason Hwang, Vice President and Director for Planning and Research at the Federal Home Loan Bank of Boston, provided an economic update. Lastly, we were pleased to have Kathleen Kraninger, Director of the Consumer Financial Protection Bureau (CFPB), speak about the challenges the CFPB has faced during COVID, regulatory changes, consume protections and what to expect in the near future.